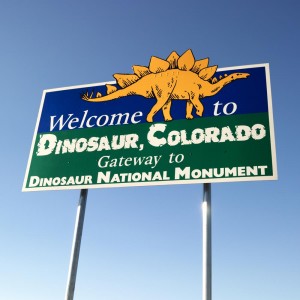 Dinosaur National Park was declared a National Monument in October of 1915.  The park features fossils of dinosaurs, one which is the almost complete skull, lower jaw and the first four vertebrae of the neck.  The fossils of the dinosaurs exist from rock layers enclosing the fossils during the Jurassic Period of 150 million years ago.  It is believed that the dinosaurs and other ancient animals found in fossil form were washed into the area from flooding and then buried here to form amazing fossils. The fossil beds were originally discovered in 1909.  They were discovered by a paleontologist from the Carnegie Museum of History, Earl Douglass.

The area that the fossils were originally discovered was declared as Dinosaur National Monument in 1915.  The area originally consisted of 80 acres until 1938 when it incorporated the dinosaur quarry in Utah expanding the park to over 200,000 acres that now contain the river canyons of Green and Yampa. A great way to experience the park is by camping out underneath the stars.  There are six different campgrounds located in the surrounding area of Dinosaur National Monument and combined they have over 120 sites to choose from.  There are three sites each on the Utah side and the Colorado side of the monument. Green River Campground has 80 sites to choose from.  It is $12 per night per site and reservations are not accepted. The campground is open from the middle of April until October 1st. Split Mountain Campground has 4 group camp sites that can accommodate up to 25 people and 6 vehicles per site.  The charge is $25 per site per night.  They do accept reservations during peak season from April 19th until September 30th. The campground is open year round and outside of peak season the sites are first come first serve.