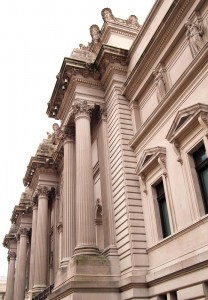 Known for its vast permanent collection, as well as the fact that it is ever growing, the Guggenheim is located on the Upper East Side of Manhattan in NYC.  It features an impressive collection of Impressionist, Post-Impressionist, early Modern art as well as contemporary art.  It also features special exhibits throughout the year.  The museum was founded by the Solomon R. Guggenheim Museum originally as the Museum of Non-Objective painting in 1939.  It evolved into what is now just fondly referred to by many as the Guggenheim.

Of course what the Guggenheim is most known for is its design of the structure that it is housed in.  It was designed by famous American architect Frank Lloyd Wright, and is considered one of the most influential architectural landmarks of the 20th century.  The ode to its construction is the temple of the spirit.  That was what inspired Wright to build the museum wider at the top than what it is at the bottom.  It is most known for it ramp gallery that winds up and around the outer walls and is open in the middle to a large skylight.  The spiral ramp of the inner gallery extends from the main floor and winds all the way up, going round and round.  Of course with anything that is done way outside the box, there was much critique of the building. Many saying the actual structure outshone the collection of art that it was meant to showcase. Many said that the structure was unable to exhibit the art as it should be with the shallow, windowless concave niches that were meant to be used as display space.  There were actually 21 artists that wrote letters protesting putting their art on display.

Of course with the passing of time, the building of course has come to be held in high esteem, and the art is displayed how it was originally intended along the walls of the ramp.  Over the years there have been renovations and additions made to the original building.  Admission to the Guggenheim is $22 for adults.  Seniors and student admission is $18 with a valid ID, and children under the age of 12 are free as are members of the museum.   Self-guided audio tours are free with the price of admission. The museum is closed on Thursdays.