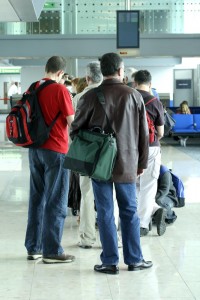 Those of us who travel by plane are aware of the new rules by now regarding what is and is not allowed in carry-on luggage beginning in late April however, the controversy continues still.

Last week the in flight airline workers began making it clear that the new rule allowing knives of any size on the plane is not ok with them. Thousands of airline workers have told TSA that they believe that this is a mistake and are taking to the authorities believing that knives, even if they are less than 2.36 inches are still dangerous enough that there is no reason that they should be allowed. Three airlines have outwardly opposed the ruling including Delta, American, and US Airways but TSA is sticking to their guns so to speak saying that small knives and the other now allowed items are not dangerous enough to take down a plane. Critics to this rule are quick to remind authorities that the 9/11 hijackers used box cutters to take control of four planes.

While TSA is not looking as though they will back down in regard to this, States are still finding ways to keep knives out of airports altogether including Michigan who recently joined ranks with states such as California and Massachusetts who ban pocket knives from even coming into airports making the new TSA law moot at least to a point. Michigan may not search those entering airports but if travelers are caught with pocket knives by airport security can have their knife removed whether TSA agrees or not.

As always, this kind of information is available for you at TSA.gov. If you have questions, find out before you go and make your time traveling simpler and less stressful along the way.

What do you think? Share your opinion with us.

Bill Bailey Travel services include travel reviews and tips to help you become a more informed and prepared traveler.